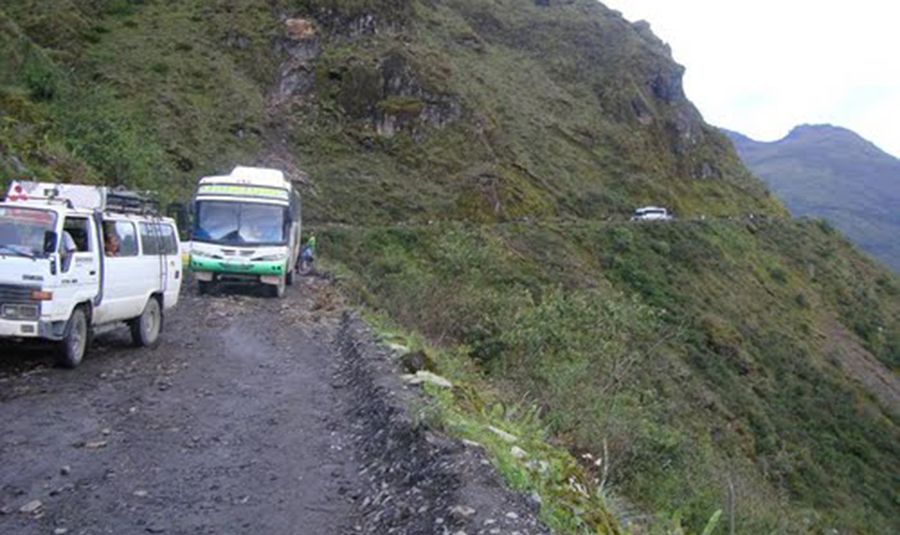 Abra Sandia is a high mountain pass at an elevation of 4.495m (14,747ft) above the sea level, located in the Sandia Province, in Puno Region, Peru. The zone is prone to heavy mist and can be dangerous in low visibility conditions.  Avalanches and landslides can occur anytime.

The road to the summit, also known as  Abra Apacheta, is called 34H. This road has humbled many egos. It’s not for the sissies and shouldn’t be attempted by novice drivers.  The road is in dreadful condition and requires strong nerves to negotiate it. It’s certainly breathtaking and it has a fearsome reputation.  It still remains an adrenaline-pumping journey and is definitely not for the faint of lungs, heart, or legs. Words can’t describe the road and pictures don’t do it justice.

34H is a terrible high mountain road located near the Bolivian border. It’s very narrow, following several rivers and pretty steep. It includes hundreds of turns. The road is difficult and it’s a nightmare in the wet or dark (or both). There is little room for error on this road. Don’t stuff your belly too much. Eventually, you might feel vomiting temptations while climbing circuitous roads at higher altitudes. This road tests the skill, and courage, of any driver. It’s definitely not for anyone suffering from vertigo or a fear of landslides. One mistake and it's a free fall to your death. It’s incredibly disorienting to look over the edge, or even just to see the valleys a couple thousand feet below you.  In many places the road is bordered by a drop of hundreds of meters (many hundreds of feet) unprotected by guardrails.  The surface of the road is asphalted. But some sections are only gravel due the floods and landslides. Avoid driving in this area if unpaved mountain roads aren't your strong point. Stay away if you're scared of heights. There are sheer drops virtually along the entire route and enough hairpins to make a whirling dervish dizzy. There are some narrow sections -scarcely wide enough for two cars- where if two vehicles have to pass each other, one might have to reverse for some kilometers of winding narrow road to get to a place wide enough to pass. It shouldn’t be attempted by those who don't know how to reverse.
Pic: henryque