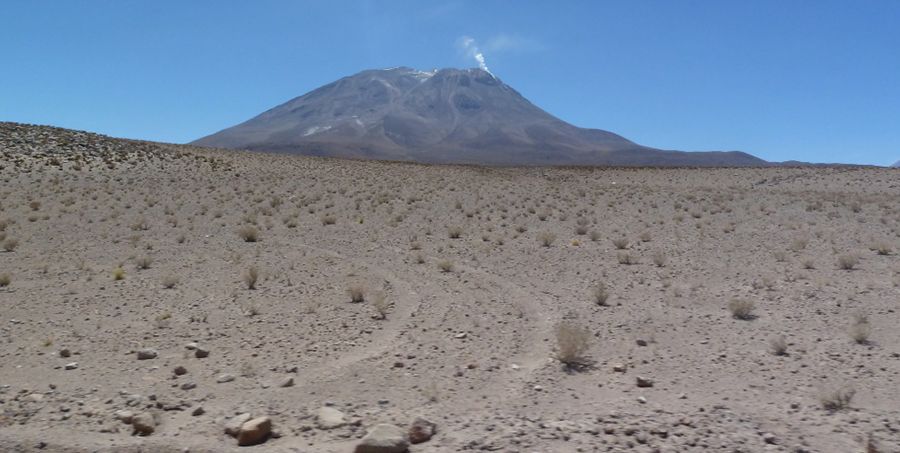 The wild Ollagüe Volcano, one of the highest roads of South America

Volcán Ollagüe is a massive andesite stratovolcano in the Andes at an elevation of 5.868m (19,251ft) above the sea level located in northern Chile (Región de Antofagasta) on the border with Bolivia (Departamento de Potosí). Words can’t describe the road and pictures don’t do it justice. It’s one of the highest roads of South America.

Located in the Northern Atacama Desert, the road to the summit is an old road on the north side to a disused sulphur mine. It’s extreme. Only 4wd vehicles with high clearance. The road ends at 5.705m (18,717ft) above the sea level. This road has humbled many egos. It’s not for the sissies and shouldn’t be attempted by novice drivers. The road is in dreadful condition and requires strong nerves to negotiate it. The gravel road is extremely narrow and bordered by a drop of hundreds of meters (many hundreds of feet) unprotected by guardrails.

It's one of the highest roads of the country. It’s certainly breathtaking and it has a fearsome reputation.  Expect hundreds of hairpin turns. No historical eruptions have been confirmed from Ollagüe, but there is intense fumarolic activity and a persistent steam plume emanates from a fumarole on the south side of the summit dome.
Do not travel this road in severe weather conditions. Avalanches, heavy snowfalls and landslides can occur anytime. On January and February  violent storms can hit the area.  It's one of the highest motorable roads in the world. Do not take this drive if you have respiratory problems or any type of heart condition. Notorius lack of oxygen that tests the organisms and a high degree of steepness. Most people feel altitude sickness at around 2,500-2,800 meters. Extremely low oxygen for engine combustion. A major hazard of altitude is the sickness that can indiscriminately affect anyone regardless of age or fitness. The summit has about 40% less oxygen than at sea level, thus breathing is more difficult. Your pulse rate will increase and movement will be more laborious at the summit. The high elevation with its risk of altitude sickness, weather concerns, steep road grade, and overall inaccessibility make the pass dangerous and summit trips difficult.
Pic: camille andrew