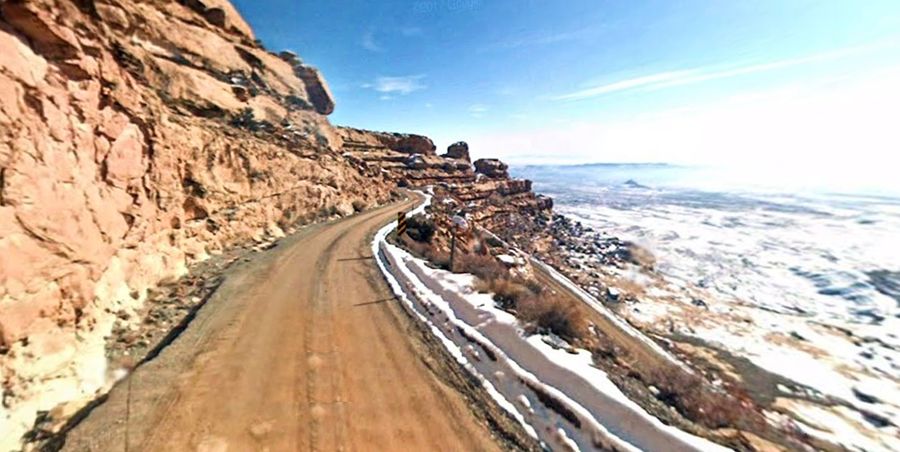 Part of Utah Route 261 Mokee (or Moki) Dugway is a staggering, graded dirt switchback road carved into the face of the cliff edge of Cedar Mesa. It consists of 3 miles of steep, unpaved, but well graded switchbacks (11% grade), which wind 1,200 feet from Cedar Mesa to the valley floor near Valley of the Gods.

Located just north of Mexican Hat in San Juan County, in the southeastern portion of the U.S. state of Utah, the road is mostly paved except for the Dugway. This section is three miles of unpaved, but well graded, switchbacks descending 335m (1100 ft) from the top of Cedar Mesa. The road connects Utah Highway 95 with US Highway 163. Mokee Dugway is carved into the face of the cliff edge of Cedar Mesa, with a series of sharp switchbacks down a steep (11%) gravel road over less than three miles.

It's a relatively easy gravel road to drive, for the driver, but if you're the passenger, sitting on the edge and your driver is enjoying the view... Well, it can be more of thrill ride. The State of Utah recommends that only vehicles less than 28 feet in length and 10,000 pounds in weight attempt to negotiate this steep (11% grade), narrow and winding road. Most vehicles can travel the route safely. Caution is advised for motor homes or vehicles pulling trailers. There are no facilities along the Moki Dugway stretch. The road is wide enough to easily accommodate the passage of vehicles, but there are no guard-rails.

When was Mokee Dugway built?

The road was constructed in 1958 to provide a way to haul ore from the Happy Jack Mine on Cedar Mesa to the mill in Halchita, near Mexican Hat. The term "mokee" is derived from the Spanish word moqui, which was a general term used by the 18th century Spanish explorers and settlers in this region to describe the Pueblo Indians they encountered and the vanished culture which had left behind the numerous ruins they discovered during their travels. This term continued to be used by the Anglo pioneers, who moved into southern Utah during the 1800's, and their descendants.

This is a remarkable road trip. Remember to bring your camera. Make sure you leave enough time to make plenty of stops along the way. This route provides breathtaking views of some of Utah’s most beautiful sites. Scenic views of Valley of the Gods and distant Monument valley open at every turn of the dugway. Breathtaking views and a hint of danger make this road one of the most enthralling routes to travel in southern Utah. A parking area near the top provides a stunning view of Valley of the Gods. Given the road's condition, it's important for drivers to pay close attention as they are navigating their way through it.

The dugway is usually open year-round. During and after a storm the road may be impassable, even with a four-wheel-drive vehicle and can easily get muddy if it rains making it challenging to get through. Although it can be a reasonably easy drive in favourable conditions it also has the potential to be a very difficult track and at times impassable after wet weather. It is very important to check rainfall in this area before setting off and make sure you are well prepared for the trip.
Road trips have a special charm to them, and most people love them. They are especially popular among college students. So, if you and your buddies have decided to take one, be sure to figure out your route and check all the interesting facts about the roads you will pass beforehand. And while you do that, make sure you have somebody helping you out with your assignments. For example, you can hire a professional essay writing service and have experienced writers write personal statement for me or work on any other paper for you.