Alpine Loop in CO is truly a backcountry experience

Alpine Loop is a spectacular drive with a length of 101km (63 miles) located in the San Juan Mountains of Southwestern Colorado, USA. The road climbs up two 12,000-foot passes (Engineer Pass and Cinnamon Pass) and is recommended for high clearance four wheel drive with short wheel base.

Passenger cars, RV’s, camper vehicles and vans are not recommended. Semi-trucks with trailers are prohibited. Uphill traffic has right-of-way on all roads. The speed limit is 15 mph. Depending on winter snows, the Loop opens about late May/early June and closes in late October. The Alpine Loop is a combination of two great 4x4 roads, Engineer Pass and Cinnamon Pass. These trails are roughly centered in the spectacular San Juan Mountains in southwest Colorado between Lake City, Silverton and Ouray.

The Alpine Loop National Backcountry Scenic Byway winds through the alpine terrain of the San Juan Mountains. Rental services for off-highway vehicles are being offered by surrounding towns. Along the way you can fill your camera with unbelievable shots of soaring mountain peaks and seven ghost towns. Recommended if you are not afraid of heights. Stay on your side of the road on blind curves. Honk to warn on-coming traffic.

How long does it take to drive the Alpine Loop in Colorado?

The expected driving time is 4-6 hours. Alpine Loop covers 63 miles of roads between the towns of Lake City, Ouray and Silverton. About two thirds of the route is dirt road suitable for 2-wheel-drive cars, so everyone can experience a portion of this scenic area. But in order to traverse the entire route, if you want to cross Engineer Pass, Cinnamon Pass or Mineral Creek, you'll need a 4-wheel-drive, high clearance vehicle. These rocky roads were first used by 19th-century miners, who carted their ore off to Silverton, Ouray, and Lake City in mule-drawn wagons. Spend an afternoon exploring abandoned townsites, structures, and other former mining haunts - if you want to commune with ghosts of Colorado's rich past.

Is the Alpine Loop in Colorado Open?

The road is winding, in some places only wide enough for one vehicle, and in many places bordered by a drop of hundreds of meters (many hundreds of feet) unprotected by guardrails. The trail leaves pavement and people behind, crossing the remote, rugged, spectacular heart of the San Juan Mountains. It's demanding - the two 12,000-foot passes (Cinnamon and Engineer) require a high-clearance 4-wheel-drive vehicle - but the well-prepared motorist reaps unparalleled rewards: pristine mountain views, hiking and biking trails, great camping opportunities, and ample solitude. The place is now literally crawling with ATV’s, dirt bikes, and small 4x4 vehicles coming and going every which way. It’s usually open from late May through October, depending on snow depths and damage from spring run-off. 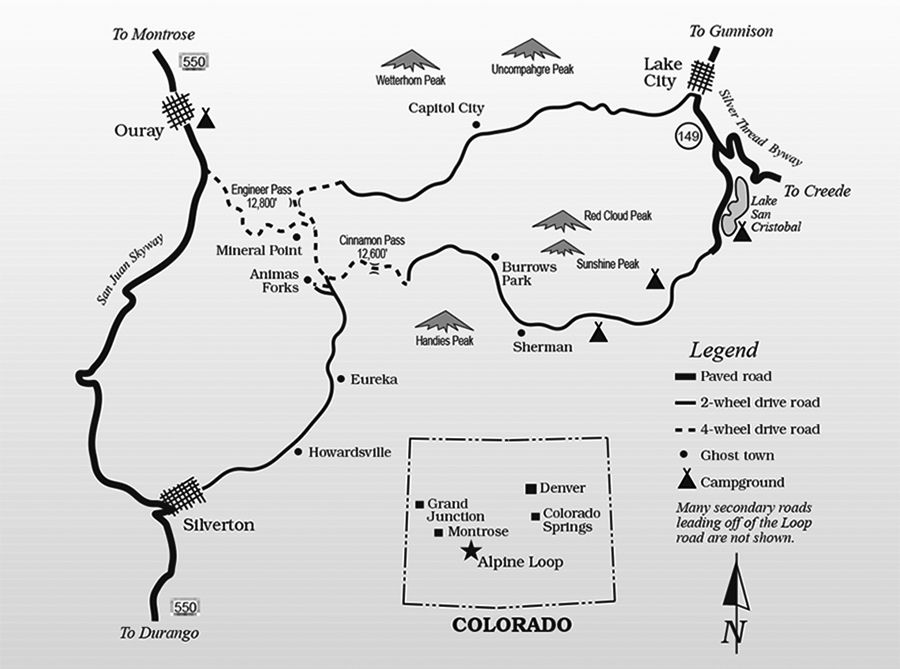