How long is the Going-to-the-Sun Road?

Nestled in the Rocky Mountains of the western United States, the road is 80.46km (50.0 miles) long, running from West Glacier (in eastern Flathead County, Montana) to St. Mary (in Glacier County, Montana). It's one of the America’s 15 Best Motorcycling Roads.

Is the Going-to-the-Sun Road paved?

The road, nicknamed as the crown jewel of scenic drives in Montana, is totally paved but quite narrow. It’s a winding two-lane highway with hairpin turns bisecting the Glacier National Park west to east. Whilst it has spectacular views, the road is also dangerous featuring twisting turns and ridiculously narrow lanes. Vehicles, and vehicle combinations, longer than 21ft or wider than 8ft (including mirrors), are prohibited between Avalanche Campground and the Rising Sun picnic area parking. Vehicle and vehicle combinations over 10 feet in height may have difficulty driving west from Logan Pass to the Loop, due to rock overhangs. Stock trucks and trailers are able to access Packers Roost on the west, and Siyeh Bend on the east. Portions of the road hug the mountainside as it traverses over steep drop-offs and steers through tight curves.

When was the Going-to-the-Sun Road built?

This engineering marvel is heralded as one of the most scenic drives in USA. Construction of the road began in 1921 and was completed in 1932. It was opened to public on July 1933. In 1938, portions of the road were paved with asphalt. It’s the only road that crosses Glacier National Park. In 1983 the road was included in the National Register of Historic Places and in 1985 was made a National Historic Civil Engineering Landmark.

How long does it take to drive the Going-to-the-Sun Road?

Is the Going-to-the-Sun Road open?

The road is usually open from mid-June through mid-October but can change due to weather conditions at any point. Up to 80 feet (24 m) of snow can lie on top of Logan Pass, and more just east of the pass where the deepest snowfield has long been referred to as Big Drift. It’s said to be one of the most difficult roads in North America to snowplow in the spring. Portions of Going-to-the-Sun Road remain open all year and provide access to many locations and activities.

Why is it called Going to the Sun Road?

The road is named from nearby Going-to-the-Sun Mountain.

What’s the highest point of Going to the Sun Road? 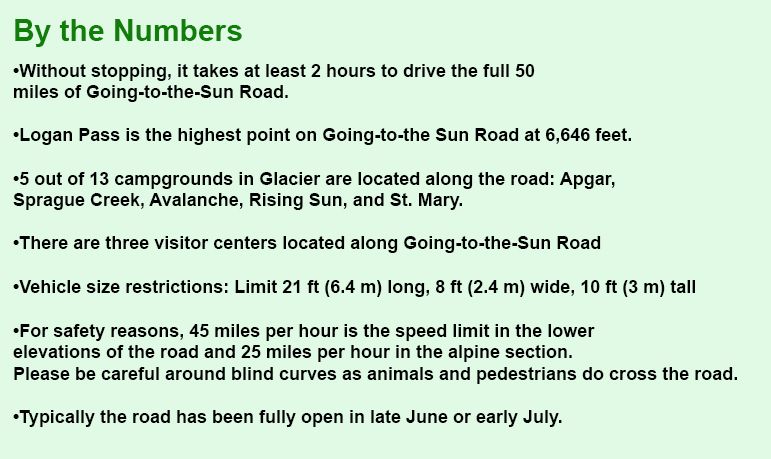 For more information on car related tips, check out Green4u.