Black Mountain Road (A4069) is a famous road that twists, dips and climbs in the western part of the Brecon Beacons National Park, in Wales, along the Black Mountains.  It features a combination of bends and there's lots of dips, twists and climbs.

Located in Gwynedd, in north-west Wales, Shell Island is a peninsula and the largest campsite in the UK. Twice a day, the tidal causeway to the island disappears with the tides, leaving the area out to sea. Road liable to tidal flooding. Do not proceed when the road is in flood. It’s one of the periodically flooded roads around the world.

Marchlyn Mawr Dam is an epic road in Wales

Marchlyn Mawr Dam is a natural lake dammed to form a reservoir at an elevation of 643m (2,109ft) above the sea level, located in Gwynedd, in north-west Wales. It’s one of the highest mountain roads of the country.

Abergwesyn Road is a narrow strip of worn tarmac crossing the Cambrian Mountains, in Wales. It’s an old drover's track stretching for about 20 miles between the small hamlet of Abergwesyn and the town of Tregar. A part of the road is known as the Devil’s Staircase. It is so called with good reason – a short but hellishly steep ascent in Powys, south Wales.

Bwlch Llanberis, this drive is well worth the time

Llanberis Pass is a mountain pass at an elevation of 360m (1,180ft) located between the mountain ranges of the Glyderau and the Snowdon massif in Snowdonia, a region in north Wales. The pass, called Bwlch Llanberis in Welsh, is traversed by the A4086 road. 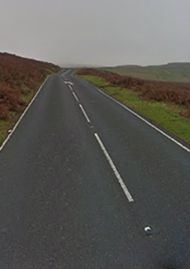 The Road B4560 in Wales is one of the most scenic drives in Europe.

Located within the Brecon Beacons National Park, in the county of Powys, in south Wales, the B4560 (Llangynidr Road) is said to be one of the most scenic drives in Europe.

The best driving routes in Wales, including journeys through the Brecon Beacons and Snowdonia.

Trecastle-Tirabad Road, a drive where you can hear gunfire

Trecastle-Tirabad is an asphalted military road located in Powys, Wales, on the edge of the Brecon Beacons National Park, one of three national parks in the country.

Ffynnon Llugwy is a natural lake at an elevation of 554m (1,817ft) above the sea level, located in Snowdonia, in northern Wales. It’s one of the highest mountain roads of the country.

Travel Guide to the Llyn Stwlan in Wales

Stwlan Dam is a mountain reservoir at an elevation of 510m (1,673ft) above the sea level, located in Gwynedd, north-west Wales, United Kingdom.

Located in the settlement of Harlech in north Wales, Ffordd Pen Llech is said to be one of the steepest paved roads in the world with a 37.45%% maximum gradient.

Bwlch y Cloddiau: a steep paved road to the summit

Bwlch y Cloddiau is a mountain pass at an elevation of 533m (1,748ft) above the sea level, located in Powys, in Mid Wales. It’s one of the highest mountain roads of the country. 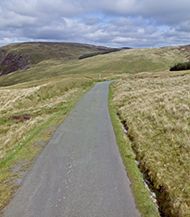 Bwlch-y-Groes, one of Britain’s toughest roads

Bwlch y Groes (Pass of the Cross) is a mountain pass at an elevation of 545m (1,788ft) above the sea level, located in the county of Gwynedd, in Wales. The length and the gradient of the climb make the highest pass in Wales stand out as one of Britain’s toughest.

Bwlch Pen Barras is a mountain pass at an elevation of 360m (1,181ft) above the sea level, located in the Clwydian Range Area of Outstanding Natural Beauty, in north-east Wales. It includes climbing 25% at various points. 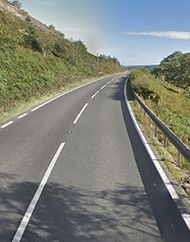 How To Travel The A44, a Scenic Road from Rhayader to Aberystwyth

Part of the A44, one of the main roads in mid Wales, the curvy road from Rhayader to Aberystwyth is a very scenic drive on the west coast of the country.

Famed for its strikingly rugged landscape, Wales is a country that is part of the United Kingdom. Dominated by the Cambrians, central and north, and by the Brecon Beacons of the south, Wales is a mountainous country on the western side of Great Britain. It is bordered by England to its east, the Irish Sea to its north and west, and the Bristol Channel to its south. It has a varied geography with strong contrasts.

Gospel Pass is a mountain pass at an elevation of 549m (1,801ft) above the sea level, located in the Black Mountains of southeast Wales. It’s a great climb, though it’s pretty tough. It’s one of the highest mountain roads of the country.