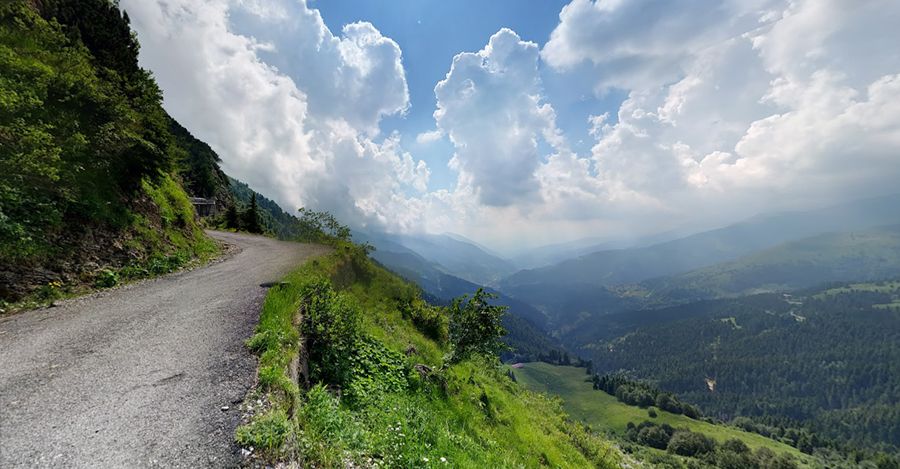 Anfo ridge road is one of the most exciting roads in the world. With a length of 20km, it’s located in the province of Brescia, in Lombardy, Italy. This old military road is certainly breathtaking and it has a fearsome reputation. It features an important rock fall risk.

The road has some unpaved parts and includes 4 short tunnels. The surface of the road has been improved the last years but any barriers along the edge afford little more than token protection. The road was closed during 6 years because a landslide but the route was cleared again in 2009. In 2010 some new tunnels were built to bypass the narrowest parts. The tunnels part have been minimally improved the last times. It is closed from November to May, but it can be closed anytime when the access is not cleared of snow. The road offers a scenical opportunity to cross the Bergamo Alps. It’s hard, scenic and beautiful but bit dusty and stony.
The road has a maximum grade of 12 percent and the speed is limited to 20 km/h. It is closed to vehicles with a width of 2,50m and a height of 3,20m. The road has some narrow parts, impassable for 2 medium cars. Not recommended if you don't know how to reverse. The original road was built on Roman times. It has never had much traffic because the bad conditions of the road where abundant stones are scattered. Since there was clearly no effort made to make the road again consistently navigable, this state is expected to continue.
Pic: Cristiano Mazzoldi