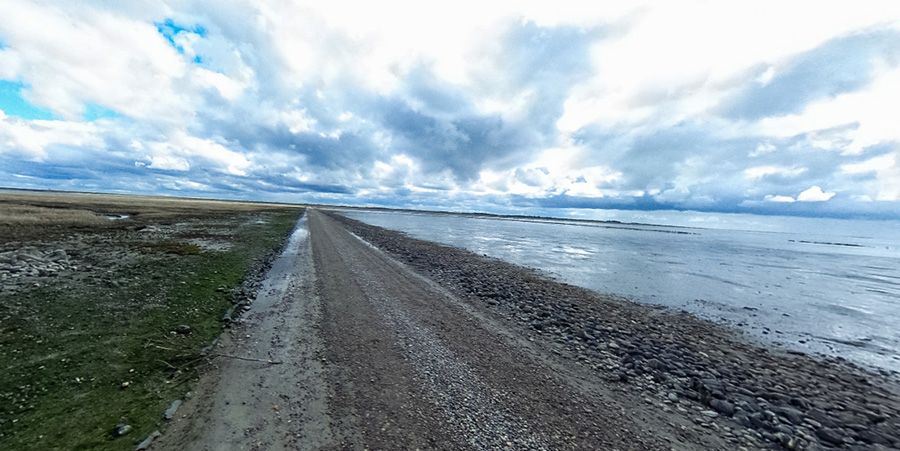 Låningsvejen: the road to the island disappears with the tides

Located in the Danish Wadden Sea islands off the southwest coast of Jutland, Denmark in the Wadden Sea, part of the North Sea, there’s an island known as Mandø. Twice a day the ancient road to the island disappears with the tides, leaving the island out to sea. Make sure you check the tide tables. It’s one of the periodically flooded roads around the world.

It’s a historic small island located in the middle of the Wadden Sea National Park of Denmark surrounded by tidel wetlands that can be reached by an unpaved causeway, called Låningsvejen, which is covered by the North Sea twice in every 24 hour period. Mandø is probably one of Denmark's most peaceful islands. That Mandø has been allowed to remain almost untouched by tourism is due to the tides, because at high tide, the island is outside the traffic connection to the outside world.
It’s said to be the Denmark's greatest secret. The drive is definitely worth it. A drive not to be missed! The causeway that is cut off twice a day by the tide, is about four kilometers (2.5 mi) long. This simple causeway road is no more than copious gravel laid down on an immense mudflat, with required frequent periodic maintenance of added gravels. To avoid skidding on this slippery road, drive more slowly, to avoid having to brake suddenly when needed. In general, operate the vehicle controls slowly. In case of dense fog, turn on your headlights and your fog lights front and rear (if available). Speed limit through the causeway is 25km/h. The route is exposed so this ride may suit older children and is best done in dry and settled weather. Do not travel this road in severe weather conditions. Conventional motor vehicles can access the Mandø Island via the causeway, although this route is compromised in storms at high tide. On summers, expect high traffic along the way.
Located within the Nationalpark Vadehavet, the island has some fascinating history. The journey will stay in your memory forever. The tides can rise suddenly, so pay attention to the posted tidal notices. The public road in the middle of the new Wadden Sea National Park is raised above the seabed, but is still flooded twice every 24 hours by the tide. The road is traversable but only when you know the tidal table.Each year there are many reports of people 'risking it' and having to be rescued from one of the raised safety points on the causeway. It's not just the actual causeway that is covered by the sea. This causeway which connects Mandø to the mainland in Jutland is in dreadful condition and requires strong nerves to negotiate it. Alternatively many visitors reach the island by way of a specially designed tractor pulled bus with greatly oversized tires. This vehicle is capable of traversing some of the firmer mudflats, but only at the lowest tides Driving to Mandø, the tractor busses are recommended. Not only is it a great experience, but you will also travel to and from the island safe and sound.

Remember the road floods twice daily with incoming tides and as the tides go out slippery seaweed is left all over it. Today the causeway attracts thousands of visitors a year to watch the twice daily uncovering of the causeway as it miraculously appears from the sea during the ebbing tide. Be sure to check for safe crossing times on the causeway's notice board before journeying to the Island. Opening times vary significantly every day and you should familiarise yourself with the causeway opening times for the day of your visit!
Pic: Peter Kristensen