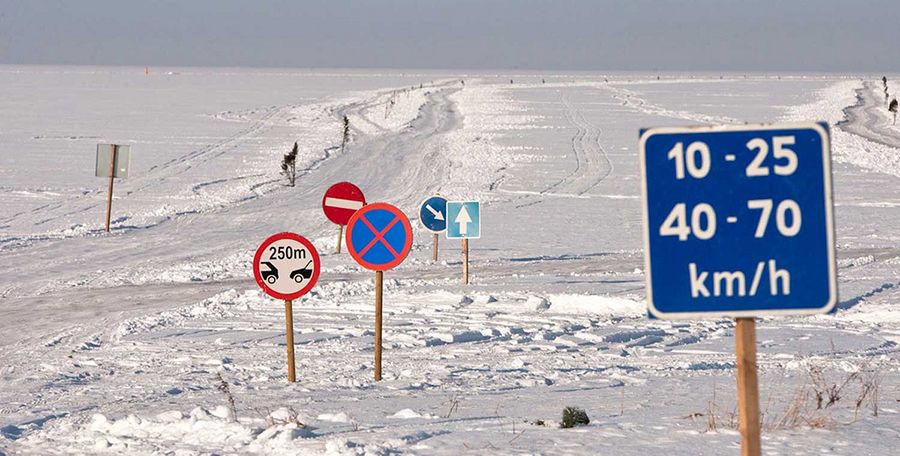 Located in western Estonia, the ice road from Rohuküla to Heltermaa is said to be the longest ice road in Europe, with a length of 26,5 kilometres (16 miles), stretching for across a frozen expanse of the Baltic Sea.

How long is the ice road from Rohuküla to Heltermaa in Estonia?

Tucked away on the western part of the country, the road is 26,5 kilometres (16 miles) running east-west from Rohuküla (a village in Ridala Parish, in Lääne County) to Heltermaa (a village in the Hiiumaa island, in Hiiu County). During winter in Estonia the sea between the islands and the mainland often freezes. The freezing of the seas between the Estonian mainland and the islands has had historical significance, as during the middle ages these occurrences have been used by armies to invade the islands as they could simply walk across the sea. Driving over the ice road to Hiiumaa, is a unique experience, because one actually drives across the sea.

Is the ice road from Rohuküla to Heltermaa in the Baltic Sea open?

This road is open only during daylight hours, in winters, depending on the thickness of the ice. The ice road is not open every winter - it depends on the thickness of the ice - in recent years it has not so often been used. The road opens when the ice is at least 22 centimeters thick. Although the sea isn't very deep in this zone, less than 10 meters, it is still an odd thought that just 22 centimeters of ice separate you and your car from up to 10 meters of ice cold sea water. One also realizes the awesome strength of ice, for such a thin layer to be able to carry the weight of a car (though the weight of the car and the ice sheet is of course carried by the water underneath).

How long is the ice road from Rohuküla to Heltermaa in Estonia?

The crossing takes approximately 30 minutes to cover the distance with favorable conditions. There are obviously rules - for example no seat-belts (easier to escape), not to drive below 40km/h (vibrations not good), no lorries/trucks (bit too heavy). Despite the worrying rules the ice road is a safe and effective winter crossing to Hiiumaa. At 26,5 km, it is the longest such road for public use in Europe today. And depending on the weather conditions, the road could grow even longer – up to 29 km. An ice road differs by letting people drive at quite a high speed with safety belts open. The speed is reduced only while approaching the occasional board- covered cracks.
Pic: Visit Estonia