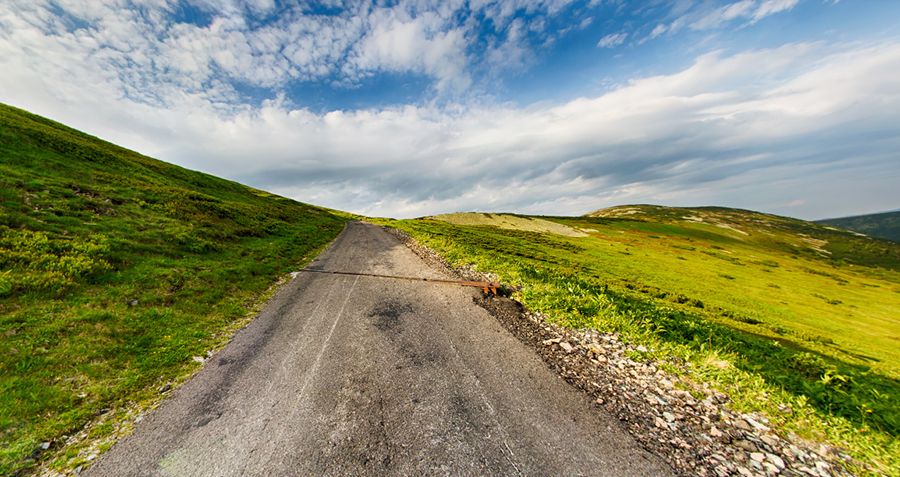 Mount Luční Hora, a paved road to the top

Mount Luční Hora, at an elevation of 1.555m (5,101ft) above sea level, is the highest peak of the ridge of Český Hřbet, located in the north of the Czech Republic and the south-west of Poland, part of the Sudetes mountain system.

The summit is located within the Krkonoše National Park (often abbreviated as KRNAP), a national park in the Liberec and Hradec Králové regions. It’s said to be the second highest mountain road in the country. It is a part of natural reservation. Its slopes are covered by meadows and dwarf pine. On the south-west fall the slopes hardly to Valley Dlouhý důl (avalanchelike terrains), on the nord slope slightly descents to meadow Bílá louka. On the south-east the mountain verges to valley Modrý důl and on the east is separated by Luční saddle from Sudniční mountain. There is a beautiful view from the top of the mountain to eastern as well as western Giant mountains and its foothills. Don’t forget your camera! The road to the summit is paved with some narrow parts. It’s pretty steep, with an average gradient of 8%.

Mount Luční Hora is located in the Giant Mountains, about 5.5 km northwest of the village of Pec pod Snezkou and 4 km east of Spindleruv Mlyn. The hill is not covered with forests: there are mountainous meadows and sporadic dwarf pine. Mount Luční Hora is a starting point of one of the longest Krkonoše ridge forks that is ended at Mount Černá Hora above Janské Lázně. The saddle between Luční Hora and Kozí Hřbety is the source of the Hrazený Brook. At the northern foot you can identify foundations of the Rennerova Bouda (chalet) built in 1797; it was burnt in 1938, during a conflict between the Czechoslovak Army and Henlein Troops.
The peak can be reached most of the year, as long as there’s no snow. Most of the trails of the area are with asphalt and can be done most of the year. For the singletrack portions, watch out for the conditions depending on weather.
Pic: Castek Vitezslav