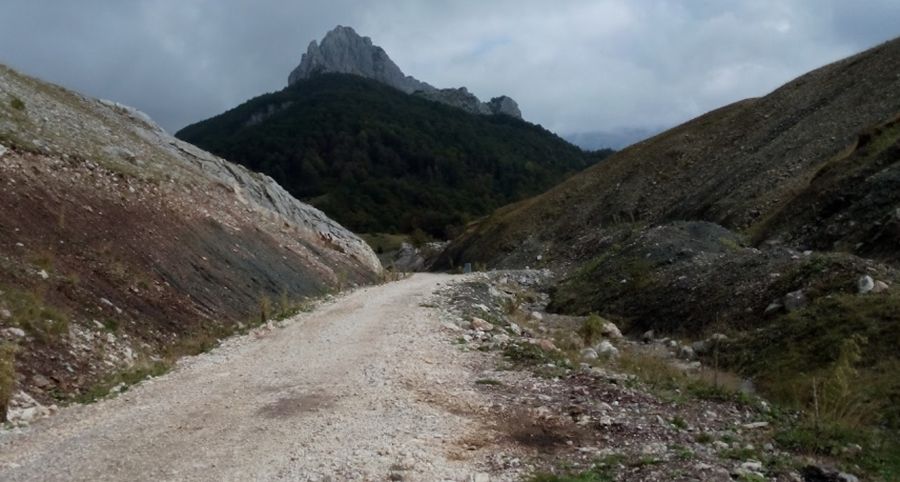 The road to Bjelašnica: 17 hairpins before reaching the top

Bjelašnica is a high mountain pass at an elevation of 2.067m (6,782ft) above the sea level, located in the stunning Dinaric Alps, in central Bosnia and Herzegovina. The road includes seventeen hairpins before reaching the top. Loose gravel makes ascent a slow one.

The steep trail to the top, (whose name was derived from word "bijelo," white in Bosnian)  is dry and rocky. The road is in dreadful condition and requires strong nerves to negotiate it. A large radar site was constructed on a subsummit of the Vlahinja ridge, while a communications centre and tower was constructed next to the weather station on the nearby Bjelašnica summit. During the ascent is possible to see buildings destroyed in the war.
The surface of the road is gravel and rocky, and chains or snow tyres can be required throughout the year. This stretch of road should not be attempted by novice drivers. It’s almost suitable for passenger cars. Bjelašnica was a place of serious combat during the 1992-'95 Siege of Sarajevo but extensive de-mining activities have taken place around recreational areas and especially around the existing ski runs, hiking and bike trails. Some people strongly advise against any offroad riding because of the land mine situation. There are considered completely safe however, an experienced guide is always advised.

A traveler on this road must be experienced and completely devoted to safe, slow and obstacle-conscious driving to deter danger. The last section is a steep, dry & rocky carriageway. This last section is very nice with the opened view to Treskavica and Visočica mountains.
The weather on this zone is harsh and highly unpredictable. A sudden drop in the temperature, even in summer, can trigger winter-like conditions. The best time to drive is during Summer, late Spring or Fall. Before the ride check the snow conditions. Strong wind can make snow-drifts even 15m thick. Upper plateu is under the snow from November till April - in hidden parts snow remains whole year.
Pic: Hazim Orlić