The most challenging tunnel roads of China

Some small villages in the Taihang Mountains of China were extremely isolated from the rest of the world by the cliffs and mountains. It was necessary to walk by small scary and dangerous paths to arrive there.

But some villagers built some tunnels to make this less steep, though more convoluted access. This is the list of the most famous tunnel roads in China, all of them in the remote Henan Province.

It’s the most famous tunnel road in the country. Villagers worked 5 years to build it. Tourism has developed well in this village with the new wide road, and many family inns have been opened.  The tunnel road is 700 meters long, with two tunnels of 5 meters high, 4 meters wide.

It’s probably the most dangerous tunnel road in the county. The road takes vehicles from 1,000 to 1,300 meters above sea level, through a series of tunnels. It’s 1.6km long. It’s a single land and includes 6 small tunnels and is usually closed in winters.

The villagers worked 30 years to cut this road. The road spirals across the surface of a cliff with windows along the way. In 2003, supported by the government, this gravel road was covered with concrete. It’s located 2 km northwest of Xiyagou, between Shanwa and Nan'anshang villages.

The tunnel is located near Chen Family Reservoir. At the tunnel exit there is a waterfall. The experience of using this road is very impressive. It’s part of a highway, so this is one of the widest and most accessible hanging road. This tunnel is busy with coal transport now, and often gets traffic jams. It is dusty in the tunnel.

It’s located near Jingdi Village. The construction of the tunnel took 6 years. The tunnel is 2 km long, with several bends inside the mountain. Located in Wuxi County, in the southwestern part of the country, the Lanying Cliff Road is an awesome path carved out of the mountains. Located on the southern slopes of the central Daba Mountains, the extremely narrow road is totally paved. It’s the only transportation route connecting Lanying village to the outside world. The road is 1.2km (0.745 miles) long down from the side of the cliff. It was constructed by villagers in 2001 who hammered out a road along a cliff to better connection of the town to the outside world. Shibanhe Cliff Road is the name of a difficult mountain road located in Hezhang county of Bijie City, in southwest China's Guizhou Province. Shibanhe village was linked to the world only with a narrow footpath called "Ladder Rock" until 2000, when the villagers decided to build a road to improve their connectivity with the rest of the world. It’s 4.5-meter-wide. The road is totally paved with concrete. It’s 470-meter-long running between Chuangou and Yueliangdongcun. Located in Pingshun County, in the southeast of Shanxi province, the old Hongtiguan Tunnel Road is a scary drive with an incline of about 30 degrees. It is made up of 5 road tunnels on cliffs and the height difference between the top and bottom tunnels is 200 meters. The road, famous for its steepness (30%), was built in 1968 by 800 villagers digging five culverts with the most primitive tools. Located in Shanxi province, Pingshun county, the Jingdi Hanging Tunnel is a very exciting drive surrounded by high mountains. In 1985 villagers decided to carve out a road in the precipitous cliffs. With only primitive tools they dug through hard rocks, inch by inch. Its construction took 15 years (1985 to 2000). The drive is very picturesque but traffic jams are very common. The tunnel is 1.526m long and ranges from 6 to 10m wide and 4 to 5m high.

Located in the prefecture-level city of Xinxiang, in Henan Province, the Huilong-Hanging Tunnel is a very challenging road. Nestled in the Southern Taihang Mountains, the road is also known as Huilong Wall Road, Huilong Wall-Mounted Highway and Huilong Hangbi Highway. It’s totally paved but very narrow. The winding road is 8km long on a steep cliff. It connects the provinces of Henan and Shanxi through the southern Taihang Mountains.

Located in Huailai county, in northwestern Hebei province, the Youzhuda Grand Canyon Wall Road is excavated on the cliff above the Yongding river. The road is challenging and scary. Located at the border of Hebei, it’s a two-way asphalt road and becomes a gravel road with a lane inside the tunnel. 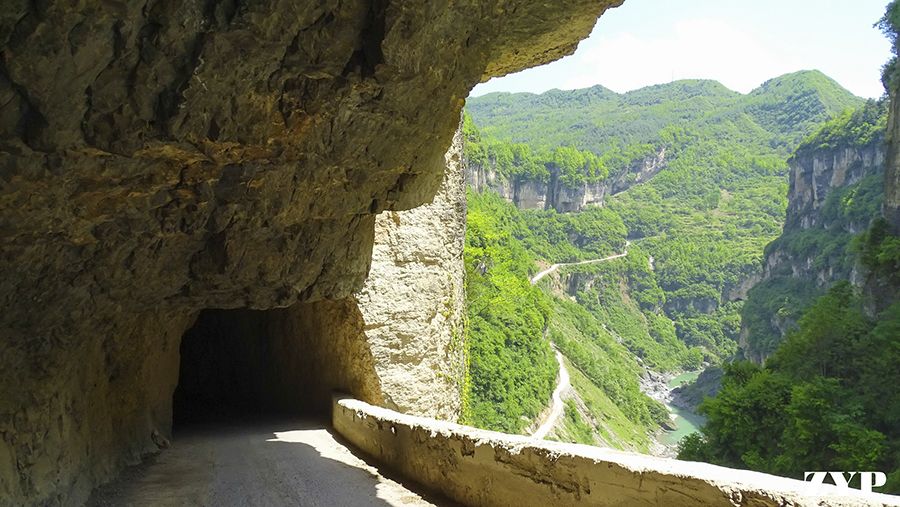 Located in Ningqiang County of Shaanxi province, in the northwestern part of the country, the road to Xifanggoucun is a scary mountain drive carved by residents of a rural village, hanging approximately 3,000ft high above ground. Tucked away in the Daba Mountain, the precarious mountain road to Xifanggoucun is totally paved with concrete. The road is challenging and scary.  It was constructed by locals between 2000 and 2006 and it’s the only transportation route connecting Xifanggoucun village to the outside world. The paved road is 6000-metre-long (3.73-mile-long).

Xiaguo Wall Road is the name of a challenging mountain road located in the prefecture-level city of Xingtai, in the southern part of Hebei province. It’s excavated on the cliff above the Xiagou Reservoir. It was constructed by locals in the 1970’s and it’s the only transportation route connecting Xiagou village to the outside world. The paved road is 560m (0.34 miles) long.

Chenjiayuan Hanging Highway is the name of a challenging mountain road located in Lingchuan County in Shanxi Province, Tucked away in the Taihang Mountains, the Chenjiayuan Tunnel Road is excavated on the cliff above the Chenjiayuan Reservoir. The road is challenging and scary. It was constructed from 1990 to 1993 for coal transportation. Chishui Cliff road is the name of a very challenging drive, located 200 meters above the Chishui River canyon in Xuyong County. The road was built by the villagers of Chahecun to cross to the other province, along the edge of the Chishuihe River canyon. Its construction took 10 years, built with hammers, picks and other hand tools. Once finished, to reach Yunnan province, they had to drive the cliff road and then taking a boat to cross the river.

Tucked away in the northwest of Henan province, the dangerous Shangla Wall Tunnel Road is a marvel of engineering dug out by hand. Set high is the Taihang Mountains, this hanging wall tunnel is 162m long, running through a series of 8 windows. A handful of local villagers built the tunnel to be hewn by hand. The tunnel was constructed between 1975 and 1977. Set high in the Taihang Mountains of Henan province, the defiant Qiwangzhai Wall Tunnel Road is 600m long, running through a series of windows. The road was paved with concrete. The tunnel was constructed between 1973 and 1978. The road offers great views of a scenic bridge leading to Qiwangzhaicun village. Tucked away in the southwestern part of the country, the defiant Shuangping Cliff Road is totally paved. It’s also known as Cliff Heaven Road or Cliff Heavenly Road. Built on a 1,500-meter-high cliff, the road connects Shuangping with the outside world. Dug out by hand, the road was constructed by villagers in 1997. Later, it was further developed using government funds and social capital in 2011. It’s 595 meters long. Huahu Cliff tunnel road is the name of an awe-inspiring route in the southeast of Shanxi province, China. Tucked away in the Taihang Mountains, the challenging road, also known as Jinyu No.56 Highway, is totally paved. Built in the 1980’s on a high cliff, the road is 22km (13.67 miles) long, running from Pingshun to Linzhou. Along the way you’ll drive through 7 narrow tunnels. Be aware of rockslides and do not drive the road on rainy seasons. Located on the western margin of the Hunan province, the challenging Xialondong Cliff Tunnel Road is totally paved. It’s a hidden gem. Built on a high cliff, the road is 1 kilometer long (200 meters into a tunnel). Built in the 1960s and 1970s, the wall-hanging road is extremely narrow. The road has been improved the last years, adding lights inside the tunnel and building a lookout to enjoy the views.